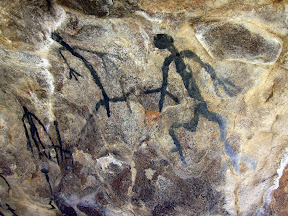 Deep in the rugged expanse of Carrizo Gorge in the Anza Borrego desert, there is a small cave of pictographs that few have ever seen. The area is surrounded by large unstable mountains, choked with catclaw, and littered with large truck size boulders. The Carrizo Gorge also marks the transition from the Colorado Desert to the dry San Diego coastal mountains.

We have visited the area numerous times. At one point Mary and I tried to scout a route to Goat Canyon along Carrizo Gorge. While this is doable, we were eventually turned back by thick groves of cat claw that proceeded to tear at our skin and clothes.
Fast forward to a couple months ago; while Googling “Anza Borrego Pictographs” I found an image of what appeared to be dark, ghost -like apparitions painted on a cave wall. The caption read “Rock Shelter, Carrizo Gorge, Anza-Borrego State Park. I did a little research to try to narrow down the location of the rock shelter but came up empty handed. Finally while talking to retired Park Superintendent Mark Jorgensen at an ABF sponsored hike, I got the clue I needed. 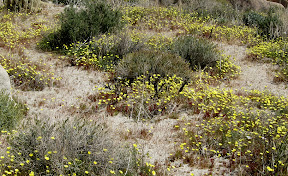 I decided I would do this trip solo because deep down I didn’t think I would find the shelter in Carrizo Gorge and I really didn’t want to drag friends and family along on a wild goose chase. My back up plan was to hike to the cattleman’s house in Rockhouse Canyon to take pictures and also scout the area for wildflowers.

Flower season or not, mid-week in the southern Anza Borrego Desert is empty. Driving up the Imperial Highway I counted two parked cars, occupants frantically pointing their cameras at anything with a hint of color.

I turned off at Carrizo Creek and made my way up the jeep trail of Carrizo Gorge finally parking at the trail head of Rockhouse Canyon.The majority of Rockhouse Canyon actually sits on BLM land just outside of the Anza Borrego State Park and is designated as part of the Carrizo Gorge Wilderness. The trail itself was in years past an old jeep road, now closed it is slowly being reclaimed by the desert. 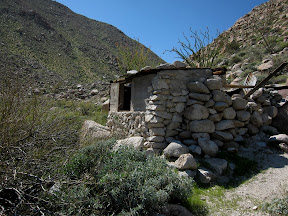 The trail up the sandy wash was lined with color. Desert Dandelions, Chuparosa, Desert Chicory and Brittle Bush were in abundance adding a sweet fragrance to the dry desert air. I explored a few small caves and rocks and finally arrived at the rock house.

According to historians, the rock house was built by cattleman Darrell McCain back in 1933. McCain built the cabin against two large boulders and added a small fireplace and a window that overlooks the expansive valley.

It is always fun to sit in the rock house and gaze out the window much the same way the McCain’s might have done almost 75 years ago. 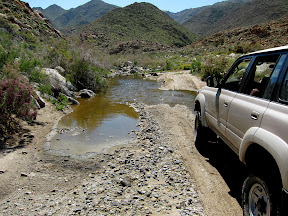 I explored the area a bit, snapped a few pictures and then headed back down the wash to the trail head. After lunch and a short solo bongo session (seemed appropriate) I jumped into the LandCruiser and lumbered further down the Carrizo Gorge road. First thing I noticed is that the trail has gotten much worse. I am not sure I would have ventured much past the East Fork turnoff without 4WD and low range. My guess is that the winter rains have affected the trail and that Carrizo Gorge has seen a lot of flowing water in the past few months.

After bouncing along in low range for thirty minutes, the trail had become impassable, blocked by large boulders and over-growth. I parked my LandCruiser and began scouring the area for signs of a cave.

First thing I found was a “water drop” of a dozen one gallon containers. (This area is a frequently used route for Mexican immigrants making their way through the desert.) A few minutes later I was able to locate the cave. 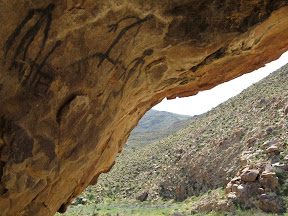 View from within the cave looking out into Carrizo Gorge

The pictographs are very dark, leading me to believe they have been touched up at some point. Nevertheless the cave is impressive with morteros and an spectacular view down into the Carrizo Gorge.

I sat in the cave and finished my water in preparation for the long drive back down the trail. The only sound was the water rushing over the rocks of the creek and a few birds that seemed upset by my intrusion.

Looking out over Carrizo Gorge I thought to myself, “Hmmm, not a bad spot.”