What do you do when summer arrives and the temperature is hitting triple digits out in the desert ?

You wedge yourself in the tiny slot canyons and the various caves around the Arroyo Tapiado area of the southern Anza Borrego Desert and later pull out the BBQ to grill hamburgers and hot dogs.
Our story begins with my friend Mark suggesting we take a day trip to explore the mud caves in Arroyo Tapiado area of Anza Borrego. At first we were a little apprehensive. We had never been out to the Anza Borrego Desert in the summer and in fact had heard stories of the thermometer hitting triple digits. 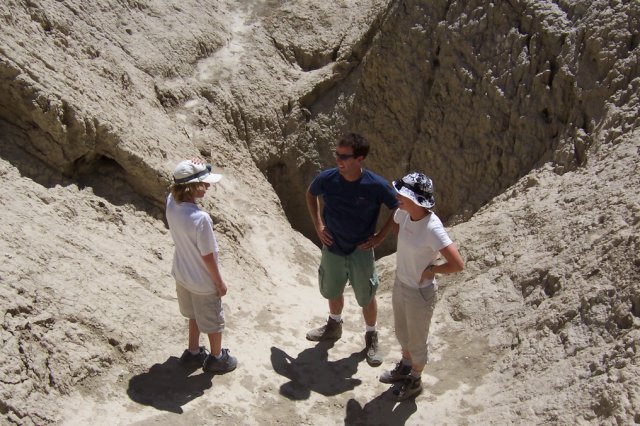 Mark assured us it would be a LOT cooler in the caves.
“Caves ?”, I answered. “Now this could be interesting…..!”

Apparently the Anza Borrego Mud Caves in Arroyo Tapiado have been around for close to 5 million years and are some of the most extensive mud caves on the planet. If you are lucky you can find fossils of creatures 1-2 million years old in this area.

After being in the dark for a half hour, your eyes really had to adjust to the bright desert sun.

Please remember such fossil discoveries should remain in the Anza Borrego State Park for others to enjoy.

A helmet with light is necessary for some of the more interesting mud caves.