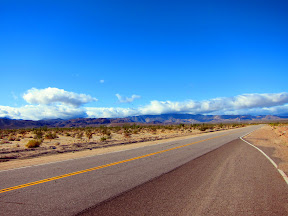 “Looks like we have some pretty thick fog”, Mary commented as we made our way east past Alpine towards Anza Borrego.

What started out as an overcast morning on the coast transformed into a damp, drizzly mist that shrouded the freeway. Lucky for us, as we started our descent into the desert town of Ocotillo, the fog lifted and the mountains blocked any further advance of the wet weather.

The S2 highway was deserted on this late Monday morning as we headed north towards the Indian Gorge turnoff. The Ocotillo plants swayed in the wind adding motion to an otherwise still desert morning. 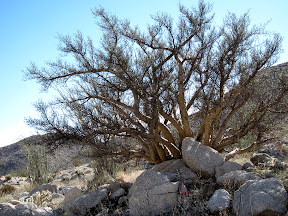 The wind, which was blowing hard at the Torote Canyon trail-head, diminished to a slight breeze once we entered the remote canyon. Immediately the canyon walls rose around us and we continued our hike up the sandy wash.

We did have the occasional dry waterfall to scramble up, but soon we reached the first Elephant Tree.

The Elephant Tree, with its’ large twisting trunk, gives the canyon its’ name, “Torote” being the rough Spanish translation for twisted. 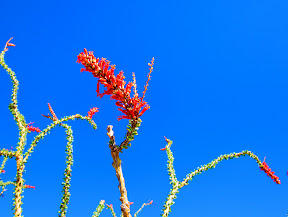 Brilliant Ocotillo bloom off the Dolomite Mine trail

Two miles in, the canyon opens up into a huge valley and we hiked on, taking pictures of the forests of Cholla and Ocotillo which dotted the ridges. Most of the desert flowers are hibernating for the winter, but we did notice bright green shrubs framing the canyon and even a few bright orange Ocotillo buds. Hopefully this is an early indication that it will be a great Anza Borrego Wildflower season.
After the hike we enjoyed a quick lunch at the trailhead before heading over to check out the Dolomite Mine trail. The dirt road up to the abandoned Dolomite Mine is in fairly good shape, but there were a few sections that were narrow, causing us to slow the Landcruiser to a crawl. 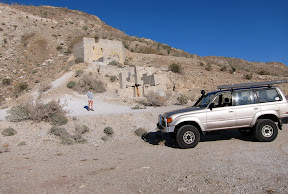 Checking out the abandoned Dolomite Mine

Back in the mine’s heyday dolomite marble was extracted and then transported over to Dos Cabezas siding to ship by rail. The ruins are an interesting glimpse into the history of Anza Borrego and the view from the top was spectacular.

Unfortunately since the mine is perched high up on a ridge, the cold wind was blowing hard forcing a quick retreat to the Landcruiser. Shorts and t-shirts weren’t quite cutting it so we ended this adventure until next time.

Photos from our Torote Canyon Hike are here.

Driving the Landcruiser out of Indian Gorge (YouTube Link)